UPDATE
At the Canterbury City Council planning committee meeting on 1st May 2018 a number of speakers, including three members of OHSCA, made the case for refusal, citing loss of heritage, architectural inadequacy, likely air quality deterioration, and the need for open space along the ring road to break up the canyon effect opposite the city wall. The CCC Planning committee listened and properly refused the application, mainly on architectural grounds and not directly on the heritage / conservation grounds which are our main concern.

The developer has now gone to appeal but the papers have yet to be agreed with the Inspector (as at 20th November 2018) so we are preparing to make the case again at the hearing where we will hopefully be allowed to bring into the argument wider heritage and environmental issues.

The Victorian former St Mary Bredin school at Rhodaus Town, on the city ring road, sits atop a three metre high mound that formed part of one of the oldest Norman castles ever built in England. Recent excavations have confirmed that the mound was part of the bailey section of a classic motte and bailey fortification – the motte was the still prominent mound in Dane John Gardens which in the 11th century had a flattened top on which sat the castle's keep.

At the St Mary Bredin site, 100 metres to the south-east of Dane John, several metres of the length of the original steep ramparts of the outer bailey are apparently still intact just below the current surface of the site of the school. Historic England have considered this remnant of the bailey to be significant enough to be rated as a heritage asset of national importance. However, while the Dane John structure is already scheduled, the bailey section has at the moment no protection at all – other than the good fortune to have been safe beneath the schoolhouse for the past 160 years.

Now the existence of both the building and the outer fortification is threatened by Planning Application CA//17/02456, submitted on 6th November 2017, for another ca 150 commercially managed student flats. If this development goes ahead, it will require demolition of the Victorian school building and the entire removal of the castle remains beneath.

At the OHSCA committee meeting in October it was decided that we should campaign to try to prevent the loss of both of these heritage assets. We think the mound should be scheduled and that a good case can be made for the Victorian building to be listed, which would in itself preserve the mound. With the planning application now in, we only have until 1st December 2017 to voice our concerns, raise objections and suggest alternative uses. Various very positive scenarios can be envisaged for the future of the site, including the possibility of much needed amenity open space for all to enjoy, with an educational aspect. We have prepared an illustrated background document to inform you about the threat, accessible via this link : Illustrated background document.

We believe our case is strong and we would very much welcome support in our campaign, both from OHSCA members and from the public. We hope particularly that many will comment about the proposals on-line by visiting the Comments section of the main application via this link : Canterbury City Council planning portal.

Planning issues are a major concern of residents 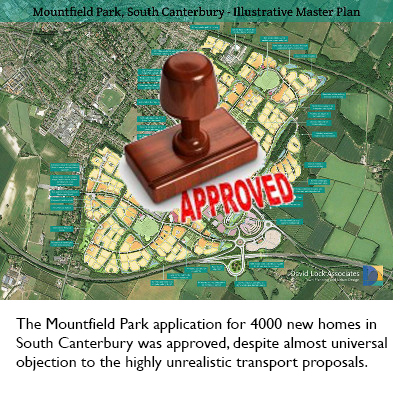 Planning issues are a major concern of residents and the OHSCA committee is very active in responding to them. At present we have great investment pressure for property development in our area, a city council much in need of developers’ financial contributions, and government policy in favour of development. Investment and economic growth are good things in themselves, but there is a constant danger of losing the distinctive character of Canterbury, and of our own area, and it is important that residents play their part in seeking the right balance

Every week we check the council listings for new applications in our area, which are circulated to OHSCA committee members and discussed at the next committee meeting. We aim to respond to every significant application, either objecting, supporting, or making a neutral comment. The council now makes very limited notifications to nearby residents, and the OHSCA has begun circulating the latest applications to members who have supplied an e-mail address.

In the case of major proposals, the OHSCA may be consulted in advance of an application being made, which is a useful opportunity to raise initial concerns, without prejudice to any comments we might wish to make later on.

Conservation Area status applies to much of our area, and the OHSCA has a member on the Canterbury Heritage Design Forum, giving us further representation and support in planning matters.

Individual residents should make every effort to express their concerns to the council in their own words, which is easily done by submitting a comment directly on the council’s planning website. Letters are still accepted, but take rather longer to be registered and appear in the "documents" section with official responses, rather than the on-line "comments" section. There is generally only a short period in which comments are accepted, so prompt action is needed or the comment will be rejected. It is most important that individual residents register their own comments in addition to the OHSCA collectively. Please make it clear in the text whether you are making an objection, a neutral comment, or supporting the application. The on-line buttons for these are not functional.

A proposal for 60 retirement flats at the cricket ground was refused after the OHDS demonstrated how close it would be to the Old Dover Road. The proposal was later re-designed and approved with many of our points taken into account.

Having been successfully legally challenged by Tom Lynch in October 2021, the Mountfield Park development proposal was modified in December 2021 and resubmitted but it remains of great concern. OHSCA commissioned another report from Railton which supported the view that the increase in traffic caused by the development was severely underestimated. Both OHSCA and ACRA raised formal objections to the plan. Go to the links below for the texts of the objection and the Railton Report attached to the ACRA document.